The Fylingdales Group of Artists

Email for an invite

Membership is by invitation only.

All images shown on this website are protected by international copyright laws, no image / text or any material found within this website can be used, copied without the written permission of the artists concerned.

The Fylingdales Group of Artists have been in existence since 1925, initially formed in Denton Hawley's studio in Robin Hood's Bay with just 8 members, their aim being to exhibit Yorkshire pictures. Some confusion was caused with the opening of the early warning radar station later on, but there is no connection. With the wealth of artistic endeavours found locally the membership increased to 12 in 1926.

The first meeting of the Group was held on 25th June, 1925 followed shortly by the inaugural exhibition which was held in the Church Rooms, Robin Hood's Bay. Dame Ethel Walker, A.R.A., Owen Bowen and Ulric Walmsley were among the founder members of the Group. In 1929 the membership was increased again to 16 artists, then to 20 in 1938. With the second world war looming the group disbanded holding its last exhibition in 1939. Due to the tireless efforts of Mr. Harold Todd the group was brought back together with an Exhibition in 1948, Mr Todd served as Secretary for many years. Membership was again increased to its present number of just 22. The Group usually hold one Exhibition per year at Pannett Art Gallery, Pannett Park, Whitby, the venue being first mentioned in the Group minutes in 1952. We meet formally once a year after our Annual Exhibition. A glance at our list of members will show that we are scattered over a large area, it is quite a measure of strength of the group that Members are prepared to travel quite long distances to attend our Annual General Meeting. The main bond between us is a love of Yorkshire, its coastline and of painting. In recent years we have held other Exhibitions at different venues, including Hartlepool Art Gallery, Williamson Art Gallery, Birkenhead and Beverley Art Gallery. During the years, many well know Artists have been members including Algernon Newton, R.A.,Roland Hill, Florence Hess, Albert Pile, Fred Williams, Will Taylor, William Dealtry and many others.

Our website was launched in 2004, which includes profiles of each of the present members along with examples of their work. In 2018 the group will be holding their first 'Themed' exhibition entitled 'Whitby in Paint'. All members will create three pictures each showing our host town in glorious paint.

For the very first time a theme of Whitby

was set for the Annual Exhibition in 2018,

Members of the Group have painted,

Includes all the pictures from the 86th Annual Exhibition 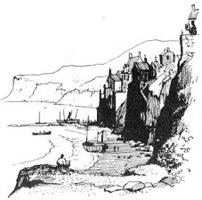